Perhaps it’s a bit self-aggrandizing (sorry, couldn’t help it), but I managed to complete yet another submission for Forgotten Heroes this month. It just came together on its own, as I had no plans to do another conversion. 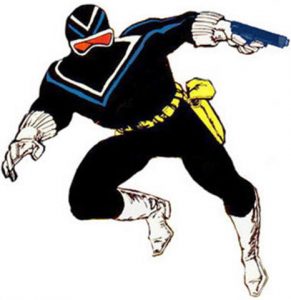 Vigilante is a DC character who has undergone several incarnations, and is not to be confused with the Justice League cowboy version. This Vigilante is from the mid-80’s, when America’s fascination with action films was arguably at its peak, and Stallone and Schwarzenegger were in their heyday. Seems like every big movie of the time was about some badass taking the law into his own hands or getting revenge by killing lots of people, usually by shooting them a lot.

Enter Vigilante, a product of the 1980’s if ever there was one. Judge Adrian Chase got fed up with having to release career criminals on technicalities or mistrials, so he donned a black ski suit and strapped on a hand cannon. Then he went after them and shot them. That’s pretty much the plot of the Vigilante series, which ran for 50 issues and wasn’t great. Basically, it’s 50 issues chronicling Adrian Chase’s spiral into madness before he ultimately eats his own gun. For a while, he stops being Vigilante and some other guy whose name I don’t care enough about to look up takes over. 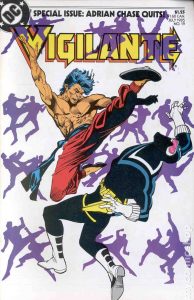 It wasn’t ALL bad, though. My personal favorite issue is this one, Vigilante #19, which is basically just one long fight scene as Vigilante tries to bring in a gang member who is a kung-fu expert. It’s penciled by one of my favorite comic artists of all time, Denys Cowan. In my opinion, no one draws fight scenes like Cowan, a talent he would prove time and time again when he took over penciling The Question. I used to dream of the day when Denys Cowan would draw Shang-Chi or Iron Fist, but to my knowledge, that never happened.

Anyway, why did I convert Vigilante at the 11th hour? Because I could. Remember that Intergang Medic I used when I made my Plant Man conversion? Well, it was just sitting there staring at me from the side of my workspace. Perhaps staring is the wrong word, considering it’s difficult to stare without eyes or a head to stare with. I thought his pose, while nothing exciting, certainly had potential.

First, he needed a head, since I used his for Plant Man. I glued a head from a Crossover Miniature (they thoughtfully provide you with head options on most of their miniatures) and sculpted the visor from green stuff. I removed the Intergang backpack and filled the resulting gap with more green stuff. Then I glued him to a Micro Arts Studio urban base.

The gun was a small issue. The one that the medic was holding looked like some kind of laser blaster (I’m not familiar with Intergang, so I don’t know what they use for guns). That simply wouldn’t do, as Vigilante uses a .357 Magnum. So I clipped one from a Heroclix Henchman and made the swap. (I know he’s holding an automatic in the picture above, but just trust me. It was usually a .357 revolver.) 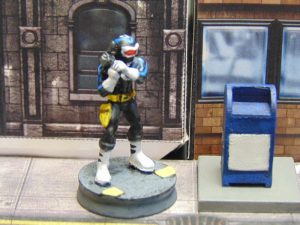 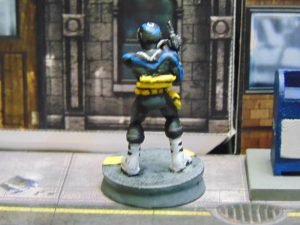 Vigilante also uses a pair of nunchaku for when he gets up close and personal with scumbags who need to be put down hard. I just used some brass rod, cut to size. 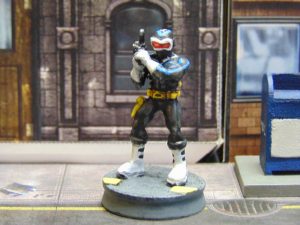 Technically, Adrian Chase was a lefty, so his holster should be on the other side, but I can live with this relatively minor inaccuracy without hurling the miniature across the room. 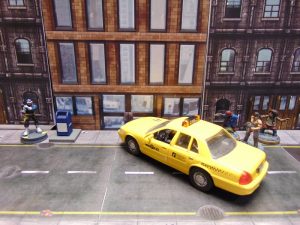 And that officially brings me to the end of Forgotten Heroes this year. I’m looking forward to seeing what everyone else does!