I’m trying to get three submissions in for the Forgotten Heroes challenge this month, and here is number two. If you found Water Wizard to be a bit of a tool, well, congratulations. You’re a great judge of character. But Water Wizard lives life like a boss compared to this guy:

Samuel Smithers was a gardener who wanted to invent a way to talk to plants, so naturally he built himself a ray gun. It didn’t work until one day it was struck by lightning, which somehow charged it with the ability to control and animate plants (I’m not making this up). His boss fired him for working on his ray gun instead of pruning the bushes (which was his job), so Smithers put on a costume, called himself the Plant Man, and vowed revenge. Unfortunately, he met the Human Torch, who quickly put an end to Plant Man’s scheme and destroyed his ray gun.

Months later, he built a better ray gun, which was also presumably struck by lightning and imbued with (better) plant-controlling power. He tried to kill the Human Torch, but failed and went to the slammer, where he was recruited by Count Nefaria; along with the Porcupine, the Eel, and the Scarecrow. (This Scarecrow is not to be confused with the cool Batman villain with the fear gas, and certainly not to be confused with the coolest crow of them all… Carrion Crow.  This is Marvel’s Scarecrow. A significantly less-cool crow.)

Any one of these jokers would be prime fodder for Forgotten Heroes, as they’re all remarkably bad at their chosen criminal profession. But I digress.

Plant Man eventually ran afoul of the Avengers and SHIELD, after he took over a SHIELD base with a 100′ tall plant monster and a bunch of plant copies of himself. That’s about where I lost track of him. 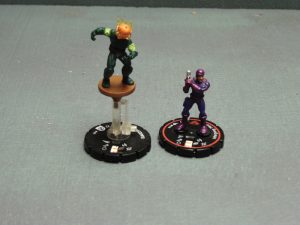 To make this conversion, I used two Heroclix figures: Jack O’Lantern and an Intergang Medic. I needed the Medic’s head on Jack’s body. I also removed Jack from his hover disk and rebased him on some plain old MDF. 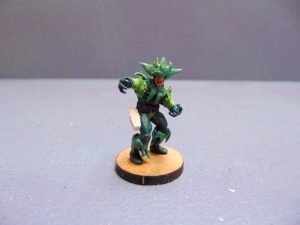 Then I set about adding the green stuff. I said it before and I’ll admit it again, sculpting is not my strong suit. Many thanks to Roger, a.k.a. Dick Garrison, for taking the time to give me some advice on how to work with this hellish substance.

Lucky for me, all I really needed to do was sculpt Plant Man’s ridiculous headdress and some plant fringes around his collar, shoulders and legs. (I forgot his gloves, but whatever.) Since Plant Man’s powers all come from his ray gun, I attached a Rogue Trader-era bolt pistol (minus clip) to his thigh.

I posed him next to some killer plants, last seen in my Poison Ivy post. 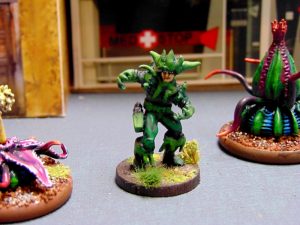 Tremble in fear, for the Plant Man cometh!

I must confess I have an ulterior motive for converting Plant Man. He actually appears as a villain in an old TSR Marvel Super Heroes module, The Last Resort, which I plan on tinkering with for Super Mission Force. Originally, I was just going to replace him with another sucky bad guy, but Forgotten Heroes has given me the excuse to put some effort into making an actual Plant Man miniature!

Hopefully I can get my third submission in by the end of the month, but it will require more precise sculpting with the dreaded green stuff. I’ll do my best!