Last year my fellow miniatures enthusiast Carrion Crow invited me to take part in the Forgotten Heroes challenge. I played hard to get at first, but then when I saw how much fun it was going to be, I begged him to let me take part. He graciously agreed. I converted and/or repainted the entire Liberty Legion, along with special guests Spirit of ’76, Patriot, Union Jack and Bucky! This year, I’m hoping to submit three Forgotten Heroes, not a whole team. So, without further ado, here’s the first:

The Water Wizard is a really lame Marvel villain with water powers. In fact, it turns out he can control almost any liquid, not just water. You would think this would make him pretty powerful, but Water Wizard is an idiot. In 1977, he made his debut in the Ghost Rider comic book and promptly got his clock cleaned by Ghost Rider, both in his initial appearance and pretty much every time they met after that.

He actually fought some other Marvel good guys, like Captain America, with predictable results (he lost). He was recruited by criminal financier and Hugh Hefner lookalike, Justin Hammer, but ran away when he had to fight Iron Man.

After a while, Water Wizard changed his name to Aqueduct, which is an even dumber name than Water Wizard, and tried to continue his criminal ambitions. Instead he joined the Thunderbolts and that’s about when I lost track of him. 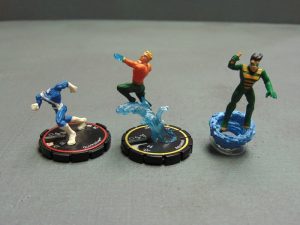 To make this conversion, I used three figures. Because I never throw anything out, I had a headless Quicksilver left over from when I made Jack Frost in my first Forgotten Heroes challenge last year. . He’s been grotesquely hanging around in a corner of my hobby space since then. I thought that the head of the Weather Wizard (similar name, different publisher, equally lame bad guy) would look pretty good on the body. His  hair is already blowing around, so it would match pretty well with the running pose. For added effect, I thought I would use this water spume on the Aquaman figure for something… 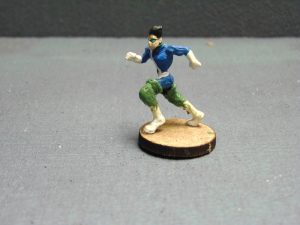 An idea took shape. I re-headed and rebased the miniature, and sculpted his fashionable hip waders out of green stuff. (A side note: I suck at sculpting anything. This is problematic, as my next Forgotten Heroes submissions will require much more sculpting. Thus I have sought the aid and advice of a sculptor extraordinaire to guide my efforts henceforth…) 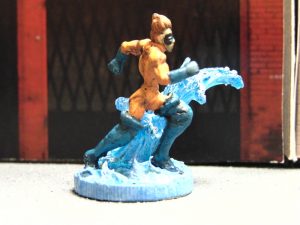 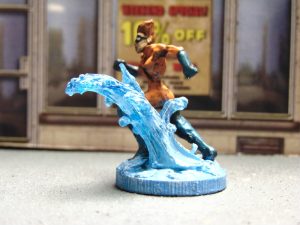 I removed the cumbersome Aquaman model from the water spout and attached it to a base of green stuff sculpted to look like water (I can handle that much). Now it looks like the water is moving with him. Then I painted the model to resemble Water Wizard. 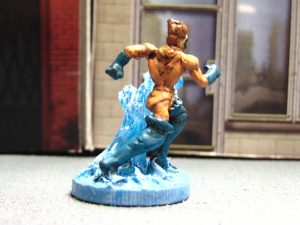 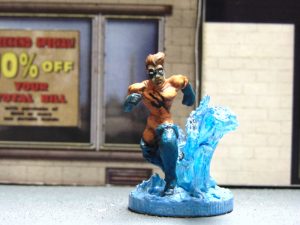 Hi running pose actually looks pretty accurate. I only have to face him away from any hero model since Water Wizard often flees. I don’t have a Daredevil-like sense of touch, so I couldn’t tell if the diagonal slash on Quicksilver’s costume was raised or if it was just a painted on until I painted over it. Turns out it’s actually part of the sculpt, which is unfortunate, as you can still barely see it through my paint. Also, I now have a headless Weather Wizard where my headless Quicksilver used to be.