Yesterday I posted the repainted members of the Liberty Legion. But of course, they don’t really count as far as Forgotten Heroes is concerned…they’re just an added bonus! The remaining heroes, to my knowledge, have never been released in miniature form, and thus they required the conversions below.

Before we start, a big thanks to Russ Dunaway from Old Glory miniatures for very generously providing me with some 28mm heads wearing three-cornered hats. I thought I might use one in one of my conversions (see below), but it turns out they were a little too small to scale with Heroclix. Still, his kindness is most appreciated, so I say again: thank you, Russ!

Next, a couple of disclaimers. First, I am not a sculptor. I use green stuff to fill gaps, and I am in awe of anyone who can work with that substance without it sticking to their fingers and making a mess. Yes, I know enough to wet my hands and use color shapers, but I still suck at it. Second, I am (and have always been) terrible at painting anything freehand. Give me a design that’s sculpted onto a miniature and I’m good. Make me draw it with a paintbrush and nine times out of ten it’s going to look like complete ass. Please bear all this in mind and don’t judge my efforts too harshly!

First up, the Patriot! 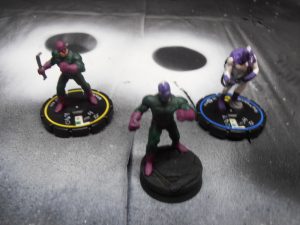 For the Patriot’s body, I chose the Wrecker. He had the gloves I needed and his costume was such that it could easily serve for the Patriot with a quick repaint. Trimming away his crowbar gave him a two-fisted tough guy stance (tough for a guy with no superpowers). For his head I used one off of a Kree Warrior. The Kree helmet has a central fin similar to Patriot’s cowl, so it was a perfect fit! 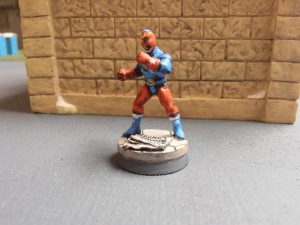 The end result, though, is a bit disappointing. As I said above, I suck at painting anything freehand, and the chest eagle and little stars proved very difficult. Using the Wrecker’s body may have been a close fit for the costume, but it resulted in Patriot being a lot beefier than he normally is depicted. Someone’s been sneaking shots of the Super Soldier serum!

Patriot’s head is where I had the most problems.  I never strip Heroclix prior to repainting (it’s rarely necessary), but this is one occasion when I wish I had. The Kree Warrior is a first generation Infinity Challenge clix model, and they are notorious for being covered in gloopy paint. By the time I repainted his helmet into Patriot’s cowl, I found it difficult to maintain any level of detail. To me, it just looks like the model has way too many layers of paint. This is by far the conversion I am least happy with.

Next is Jack Frost! 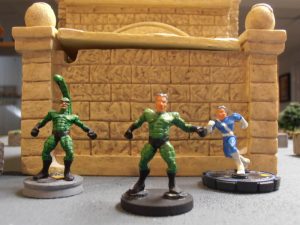 Jack is another basic head swap conversion. I had an old Scorpion miniature laying around that somehow lost his tail, so I decided to use that as the body. I packed some green stuff around the hump on his back and filled in the hole where the tail used to be. I removed Scorpion’s head and used the head off a Quicksilver model, since it seemed a good match for Jack Frost’s wavy hair. 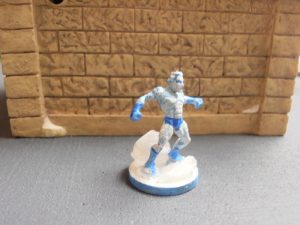 A quick prime of white paint, a wash of some ice-blue ink, a touch-up of white, and Jack Frost was done in about ten minutes, by far the easiest conversion and quickest paint job of all the Legionnaires. I’m not sure why I painted his gloves and boots (Jack is usually barefoot and gloveless), but I guess I could fix that pretty easily. I added some sea glass “ice” to his base and flocked it with snow. Done! 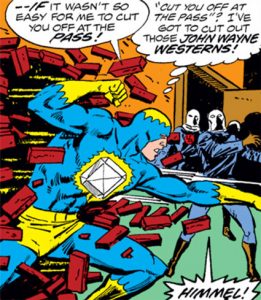 Next, arguably the most powerful member of the Liberty Legion: Blue Diamond! 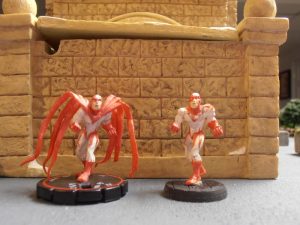 Blue Diamond began as a DC Heroclix Hawk figure, from the Hypertime set. I trimmed away his tattered cape-thing, sanded him down a bit and rebased him before priming him black. 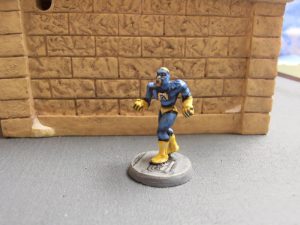 Once primed, I repainted him as shown. I had a tough time “drawing” the diamond on his chest with a paintbrush (my eyes aren’t what they used to be), but I guess I’ll just live with it. I think Hawk’s modified costume is a good match for Blue Diamond. What do you think?

And last but not least, another special guest star: Spirit of ’76! (Dear Lord, is this guy a tool or what?)

To make him, I used the body and cape of the Adam Warlock clix on top, combined with the legs and forearms of Doc Samson. I sculpted the gloves, buckles, cravat and hat (turns out it’s not really a three-corner hat after all) out of green stuff and rebased him before priming him black. I considered trying to sculpt his domino mask, but decided to quit while I was ahead. I’d just paint it on later. 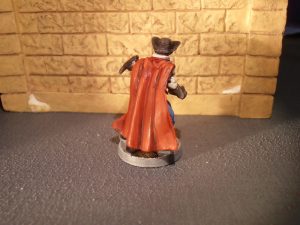 Here is how he looks repainted. I’m pretty happy with the way he turned out, even though his face could be a lot better. Turns out painting that domino mask on wasn’t much easier, and I didn’t even attempt the little blue stars around his chest (I just painted little dots). He was the most challenging conversion by far. Like I said, I’m no sculptor.

Tomorrow: as promised, I will provide some background on the Liberty Legion members, as well as my Super Mission Force builds for each hero! Now that I’ve painted them, I need to use them in a game!

2 thoughts on “Forgotten Heroes: The Liberty Legion: The Conversions!”