There’s always a someone who’s late for the train. My orc warlord on wyvern took a bit longer than I anticipated, so these miniatures weren’t done in time to make it into Monster Month. 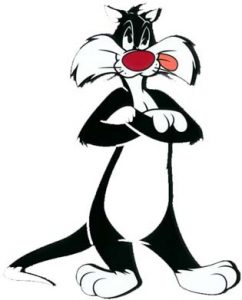 (Every time I speak the name of this monster out loud, I say it as Sylvester the Cat would. It makes it much more fun. Don’t believe me? Give it a try.)

A Displacer Beast resembles a six-legged, emaciated puma with two toothy tentacles sprouting from its back. They are stealthy carnivores that often hunt in pairs, which is why I bought two. Displacer Beasts are surrounded by a light-bending camouflage effect, which makes it difficult to determine the monster’s exact location at any given time (like when you’re about to get eaten).  These Displacer Beasts are from Nolzur’s Marvelous Miniatures, and although they’re technically the same miniature, it’s easy to get some variation in the tentacles and tail simply by doing the old “hot water bath/reposition/cold water bath” method. (I’m not sure what’s up with the lighting in these pictures, but the focus is a tad blurry. Same thing happened last time. I need to investigate this further.)

In the video game Baldur’s Gate: Dark Alliance II, you get attacked by a ton of Displacer Beasts in an ice cave. I guess that’s why I based these on snowy bases. I used Citadel’s Mourn Mountain Snow, a texture paint kind of like Stirland Mud. I like Stirland Mud a lot, because it looks like mud. Unfortunately, Mourn Mountain Snow doesn’t look like snow, it looks like white mud; so I also added some snowy flock and tundra tufts to the bases. 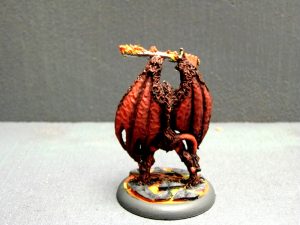 The other latecomer is a classic Grenadier Balrog. This miniature came out in the late 1970’s. I once painted him with the dreaded Testor’s gloss enamel, but I stripped the miniature years ago to repaint him. I finally did! There have been several variations of this figure over the years; one has a wavy sword rather than the flaming sword mine has. I think this miniature holds up quite well, considering its age. 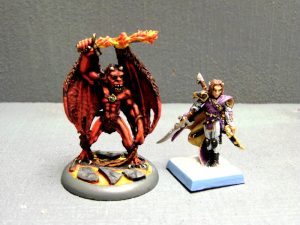 It does seem a bit small for a Balrog, as you can see from the picture above.  If you say the word “Balrog” most fantasy fans have an image in their heads that roughly corresponds to this one, i.e. the Balrog of Moria, “Durin’s Bane”. But Tolkien is often vague, even contradictory at times when describing what a Balrog actually looks like. At times he describes them as gigantic; other times he says they are twice the size of a man. Whether they have actual wings or not is apparently up for debate among Tolkien-philes. Whatever the case, looking at the mniature now, it’s a bit too red. I probably should have painted either his body or wings black for some variation. The hair on the Balrog’s body was drybrushed with a Vallejo Cavalry Brown, but it looks close enough to red so that the effect is somewhat lost.

It looks a hell of a lot better than it did when coated in Testor’s gloss enamel, and it can certainly do a fair job of representing a greater demon, nonetheless. I made the lava base out of pieces of irregular craft foam scraps I had from my Gaslands projects a few months back. I’m somewhat ambivalent about how it came out and I’ve since found a much better method for making lava bases that I’m keen to try soon.

That’s REALLY it for Monster Month. Up next: a return to Forgotten Heroes!