As Forgotten Heroes draws to an end this year, I have saved the truly worst for last. I present to you: The Aquarian!

Sigh. Where to begin?

The Aquarian’s name is Wundarr, and he was born on planet Dakkam. When he was an infant, his father put him in a rocket and launched Wundarr into space because—wait for it—he thought Dakkam was about to blow up. Turns out he was wrong. Oops.

Wundarr drifted through space in suspended animation until he arrived at Earth, where he was bombarded by cosmic rays in the outer atmosphere and got superpowers. (This somewhat plagiaristic origin story may sound familiar to you. Perhaps he should have been named “Suparr” instead. I have to assume it was meant as a parody; either that or DC found the Aquarian so ridiculous they didn’t want to draw attention to the similarities and forever associate their own character with this ball-bag.)

Wundarr grew to maturity in the spaceship, but he still had the mind of an infant when he crashed on Earth. The Thing took him under his wing for a while, then Namorita kind of adopted him before Project: Pegasus grabbed him up and used him to study the Cosmic Cube. Nothing good ever really comes of that, but Wundarr got wicked smart (I’m from Massachusetts) and his powers were increased. He called himself the Aquarian and made it his mission to bring peace and enlightenment to the world. When not doing these things, he tours the country playing the title role in Jesus Christ Superstar.

The Aquarian missed out on being faster than a speeding bullet, but the cosmic rays made him more powerful than a locomotive and able to leap tall buildings in a single bound. This is because he absorbs all kinds of energy and converts it to kinetic force, which he must discharge periodically by doing something physical, lest he explode. This won’t harm him, but the same can’t be said for anyone around him when he goes boom, so he jumps around a lot. He also has a force field that nullifies most superpowers and makes him pretty much invulnerable to anything kinetically powered, like a bullet or a punch. Presumably, you can still give him a hug. He would probably like that.

I first discovered the Aquarian in the unreadable Captain America Annual #7. I have tried to get through this particular issue about ten times in my life, and I don’t think I’ve made it very far. It’s torture. 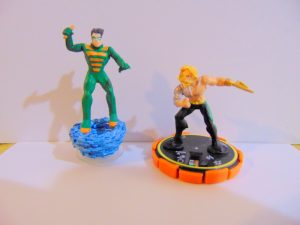 To make this conversion, I used two miniatures, the head of an old Aquaman miniature and the headless body of the Weather Wizard I used making Water Wizard earlier this month.

I needed to do a fair bit of sculpting to make the Aquarian’s ridiculous sleeves. As anyone who visits this blog regularly knows, green stuff is not my friend. I decided to try this Magic Sculpt, which is similar in function in that it is a two-part sculpting medium, but it behaves quite differently than green stuff. It’s not as sticky, and it takes a little longer to cure completely. When wet, it gets really soft, which makes holding its shape difficult. It’s also a hell of a lot cheaper. This 1 lb. set cost me less than $20. An 8″ ribbon of green stuff costs $15!

I think my concept was solid, and the miniatures used were pretty good choices, but… 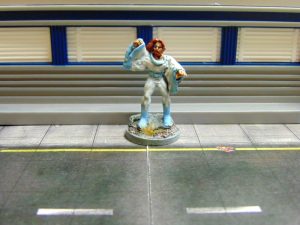 the actual execution is somewhat lacking. Here is the finished model. I’m not thrilled with how he came out. I would have liked to add more texture to the cloth sleeves, but I got annoyed with the Magic Sculpt and decided the hell with it. Hopefully by the time Forgotten Heroes rolls around next year I will be more adept at sculpting.

Nevertheless, I now have a perfectly serviceable Aquarian miniature for supers gaming, should I ever want to use him in a game, which I can’t imagine I would. Ever.