Zombtober comes to an end, and I present my final submission: a group of repaints and a classic Ral Partha miniature! 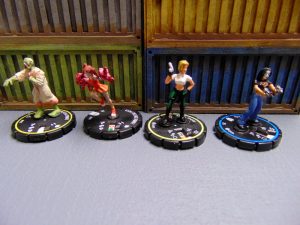 First up are the repaints: two Horrorclix zombies and two Indy Heroclix miniatures, repainted and rebased for use in the apocalypse. From L-R, a Horrorclix Zombie Patient, a Cheerleader Zombie, an Indy Clix Abbey Chase, and an Indy Clix Tiger Lily. 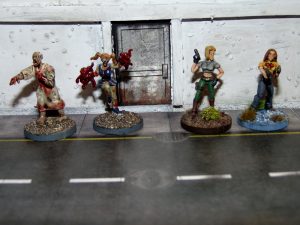 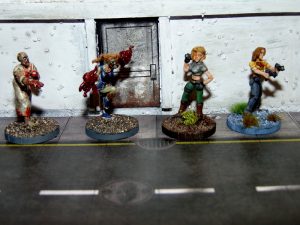 I like the patient zombie a lot, but the cheerleader is kind of silly. She’s using fistfuls of guts for pom-poms. I am not familiar with Tiger Lily or Abbey Chase, so I had no misgivings about repainting them completely for use as modern survivors. The Abbey Chase miniature could also work for a pulp heroine. Tiger Lily looks like Peter Criss without the armor. Repainting her face was easy, but what was kind of annoying was her T-Shirt. It has some design on it that I couldn’t make out, so I just painted the broken heart over it and I think it looks ok. 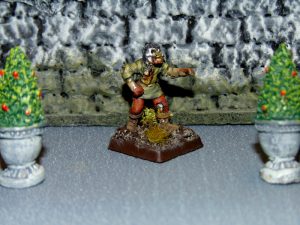 But Zombtober isn’t about REPAINTING zombies; it’s about painting zombies. Thus I present some old-school love: a classic Ral Partha zombie I’ve had since the mid 1980’s. He has never seen paint until now, so if nothing else, Zombtober has enabled me to get some long-overdue painting done!

4 thoughts on “Zombtober Week 4: Repaints and a Classic!”