A couple of months back I picked up a copy of Osprey’s A Fistful of Kung-Fu in the hopes that I would one day play it. Lord knows I have enough miniatures to jump right in (they just needed to be painted first), and whatever I didn’t have would give me an excuse to order more of Hasslefree’s Martial Artists.

After perusing the rulebook, I have to say I’m left with a definite “meh” feeling about the rules. The fluff and concept is terrific, the official miniatures by Northstar rock, but mechanics-wise it seems to be a very chart-heavy game. In other words, it seems like you’ll be spending a lot of time looking shit up as opposed to playing. Note that I haven’t actually PLAYED the game yet. These are only my first impressions.

Anyway, I don’t own any of the Northstar miniatures, but I have more than a few others can can serve well for this game. Above are Shaolin Monks by Rattrap/Brigade Games. These guys are for use in their .45 Adventure game (and in fact will be used for that purpose on this very blog, coming soon!). The sculpts on these suffer from some obvious proportion issues, but who cares? Even though I’m happy with the results, I found them difficult to paint. Orange is one bitch of a color to shade well. At least for me.  The figure in the foreground is Osato, from Hasslefree. The Asian-themed terrain was a cheap find at Petco: clearance terrarium pieces! 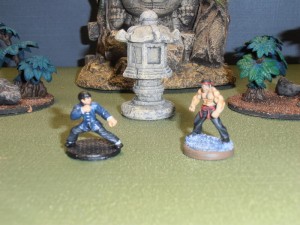 Up next are some of my old miniatures. I painted these about two years ago, and I notice some obvious flaws. In fact, I’m thinking of repainting them but I have too much to do. On the left is Hasslfree’s Tanshiro, facing off against Golgo Island’s White Tiger. You can get both from Hasslefree nowadays.

I’ve found that some of the best miniatures for AFOKF come from the Clix lines. Above on the left is a repainted IndyClix Boon Sai Hong, facing off against a Marvel Clix Shang-Chi. I should note that Clix and some of the Hasslefree martial artists have a wide stance, so basing them requires a 30mm base as opposed to 25mm. So if you play with rules lawyers, beware. As a lifelong Master of Kung-Fu fan, I really enjoyed repainting and repurposing Shang-Chi. 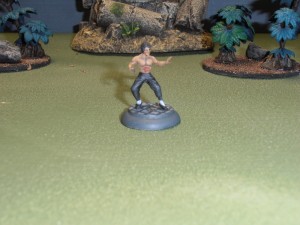 Reaper’s Chan Li (50190) from their Chronoscope Line, bears more than a passing resemblance to the late, great Bruce Lee. I painted him in homage to Enter the Dragon, complete with gashes. 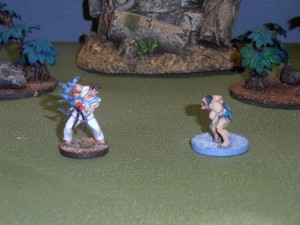 HA-DO-KEN!!!!! I couldn’t resist picking up a starter pack of Street Fighter Heroclix just for Ryu, on the left. I’m not a huge fan of the clear plastic energy effects so common on Clix miniatures, but this is an exception. I repainted and rebased him and he’s currently my favorite miniature I have painted for AFOKF. Facing off against him is Hasslefree’s Tetsuhara. I painted him to look like everyone’s favorite sumo wrestler, E. Honda. You can see the difference in base size above (Tetsuhara’s got a pretty wide stance). Ryu is on a 25mm base, Honda (Tetsuhara) is on a 30mm base. 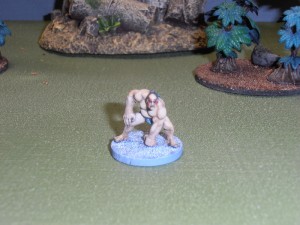 Another shot of Honda. 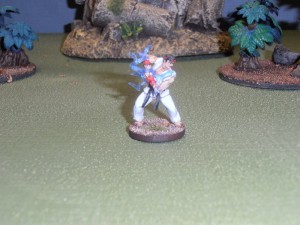 And one more of Ryu. 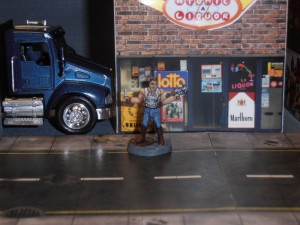 Last in this wave of miniatures is a familiar face: Jack Burton from Big Trouble in Little China. To be more accurate, this is RAFM’s Burt Jackson, Trucker from their USX Modern Day Heroes line. Northstar made their own limited edition not-Jack Burton, and it was great, but it was only available if you ordered all the starters and doesn’t seem to be available anymore.  I had RAFM’s version for a while, so I recently painted him up and posed him next to the cab of his Pork Chop Express. Hope you like him.

Maybe someday I’ll get around to actually playing A Fistful of Kung-Fu, and then I can more accurately give a review. In the meantime, it gives me an excuse to paint more martial artists!