I’m always repainting clix in between my other projects, since I know eventually I will use them for Supersystem 3.  Here are a few I’ve done recently.

First up, Daredevil and Elektra. This Elektra model is from the first Infinity Challenge set, and TBH I like it the best out of all the Elektra sculpts that have come since. While painting her costume I was once again struck by how ridiculous it is. It would take her an hour just to wrap those stupid scarves and sashes around her arms and legs, but hey…I guess it looks cool. 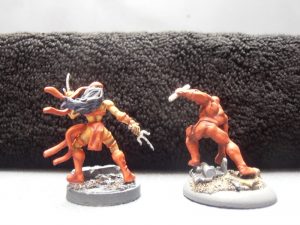 The Daredevil figure is also my favorite clix version of him. These miniatures were very easy to repaint…I just added shading and highlighting to what was already on the miniature. Red is an easy color to work with. I think Daredevil took me about a half hour. Elektra took longer (stupid costume). 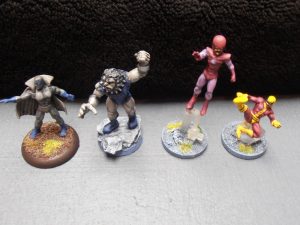 Some loser villains, L-R: The Grey Gargoyle, Blastaar, the Wizard, and Batroc “zee Leepair”! I’ll need the first three soon for SS3 games, but I couldn’t resist repainting Batroc just for laughs. He may be one of the most ridiculous villains ever, which is perfect for a fun game of SS3. Apparently, a stray brush strand adhered to Grey Gargoyle and I only just noticed it while messing with the picture. Let’s hear it for hi-res cameras! This assortment of miniatures is a good example of how I repaint batches of miniatures with similar color schemes all at once, even if I won’t be using them anytime soon. 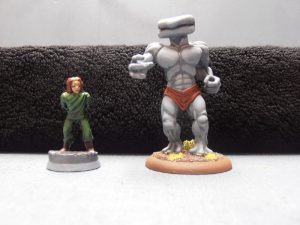 Lastly, a repaint of The Mad Thinker and his Awesome Android! Definitely crying out to be used in a series of linked scenarios. I’ll get on that soon… 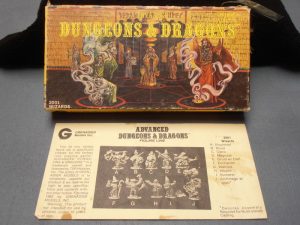 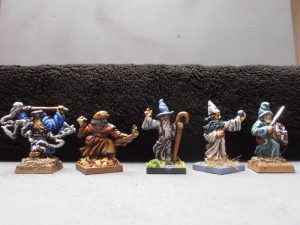 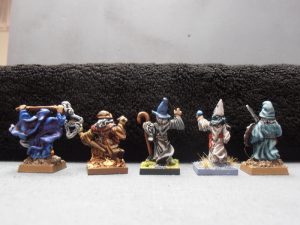 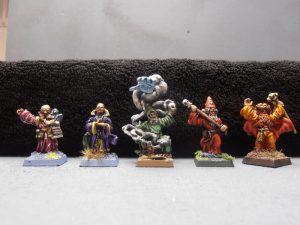 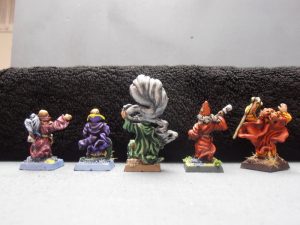 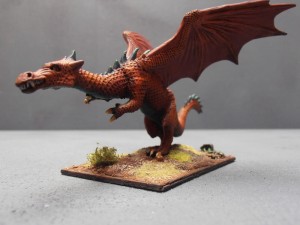 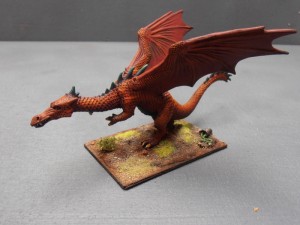 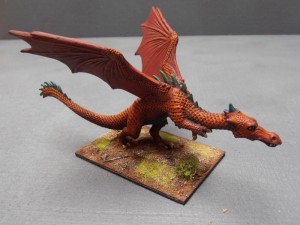 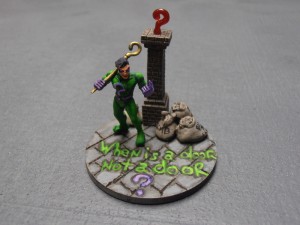 A few weeks back I decided to repaint and rebase a Heroclix Mr. Freeze for Supersystem 3, and the Batman bug has bitten me again. This time I decided to put a little extra effort into one of Batman’s “Big Four”: The Riddler! 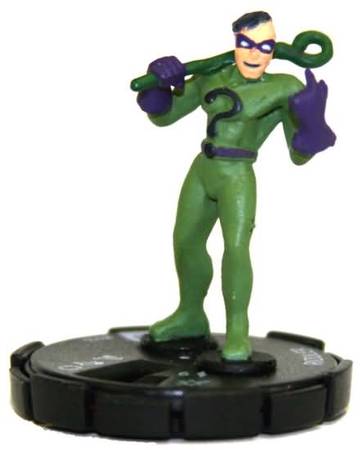 Here’s what Riddler looks like on the dial. This is one of the original ‘clix from the first DC Hypertime set. Riddle me this…when does a Heroclix miniature look like it was painted with craft paint? Answer: far too often.

Clearly, this would not stand. 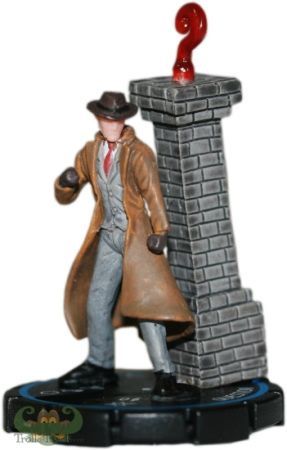 Much like the smoke on my Mr. Freeze conversion, I took the pedestal with the question mark from another Heroclix model: The Question. As soon as I saw this figure I knew I was using the question mark for something else. Anyone familiar with the Batman: Arkham series of video games will recognize that this looks exactly like one of the Riddler trophies video game completists like me spend hours trying to collect. I could have painted it green to be more in-line with the game, and I still might. But for now I’m fine with the red. 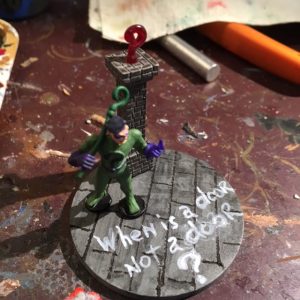 Here’s a WIP shot. I knew I wanted to include a riddle on the base, so I planned out how much space I would need. Turns out a 60mm base did the trick. This conversion was becoming more and more like a diorama! I used a Dremel engraving tip to sculpt the flagstone pattern before painting the riddle in white. I picked a fairly easy riddle that everyone should know the answer to…or do they? One can never tell with the King of Conundrums! 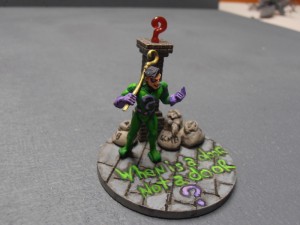 I painted the riddle bright green and cleaned up some of the mess I made trying to freehand it. The base was looking a bit empty, so I decided to add some moneybags from the Bank of Gotham. I sculpted them out of green stuff, which was surprisingly easy as there’s very little detail to sculpt on a sack. I considered giving Riddler a pistol, but in the end I left him as is.

I was originally going to just paint the stereotypical dollar signs on the bags, but it looked crappy. I decided to label them with the bank name instead. It looks slightly less crappy.

I’ve never been a stickler for base size, but 60mm is pretty big. I may have to do another version of the Riddler if I find his base is getting in the way of terrain and such. But for now I’m happy with him. Since I love Batman’s villains, I think I’ll put extra effort into every member of Batman’s rogue’s gallery to really make them stand out.

My next big Supersystem 3 game is going to be based on The Breeder Bombs, the classic (if not-so-great) TSR Marvel Superheroes adventure from the mid-80’s. Last time, I rebased and repainted the Uncanny X-Men team of my youth.  Now, I bring you…The Brotherhood of Evil Mutants!!! 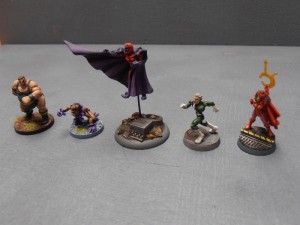 From left-right: Blob, Toad, Magneto, and his wayward offspring Quicksilver and the Scarlet Witch. All have been repainted and rebased from their original dials. I decided since Magneto is such a badass, he should have a unique base. I used this large junk base from Taban miniatures. He has a pretty solid bottom which was easy to drill and pin, making it look (IMO) better than a Heroclix flight dial. Quicksilver was extensively repainted in his original “evil” green costume and rebased on an Armorcast urban base. The Scarlet Witch is rebased on a Micro Arts Studio tech base. 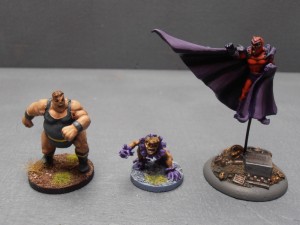 The Breeder Bombs features robot doubles of the Brotherhood rather than the actual mutants themselves, which I find really dumb. It takes nothing away from the plot of the module to simply use the Brotherhood rather than robots (and it makes more sense). You might think that aside from Magneto, these guys are a bunch of second-stringers, and you could be right. But remember: “NOTHING-NUH-NUH-NOTHING-NUH-NOTHING MOO-MOVES THE BL-BLO-BLOB!!!!” (Kudos to anyone who gets that referential joke.) 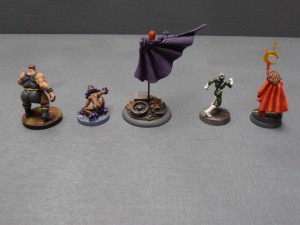 A view from the back. And now, in the immortal words of Magneto: “X-MEN…WELCOME…TO DIE!!!!!”