I’m gearing up to run the next Supersystem 3 game based on the old Marvel Super Heroes RPG by TSR. Up next is MSH-1, The Breeder Bombs, so I’ve been busy repainting and rebasing the X-Men. This time I remembered to take a picture of the heroclix before and after my efforts. 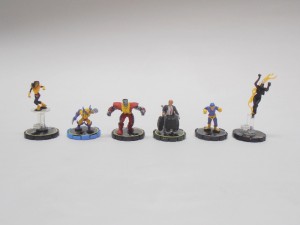 Above, L-R, Kitty Pryde (Shadowcat), Wolverine, Colossus, Professor X, Cyclops and Storm. These are the X-Men of my youth (early to mid-eighties), so in selecting my clix I went for authenticity and made sure I had a mohawk-sporting Storm. Kitty Pryde was known as Ariel back then, and she wore a completely different costume. So did Wolverine. 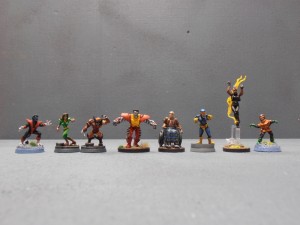 So here are the repaints, sandwiched between Nightcrawler and Rogue, who round out the post-Dark Phoenix Saga/ Secret Wars era team. I couldn’t find a Heroclix Nightcrawler that I liked (and many are expensive), and I couldn’t find a Rogue miniature that was time-specific, so I had to use these old TSR metal miniatures from the Marvel Super Heroes RPG line. They scale pretty well with the clix. 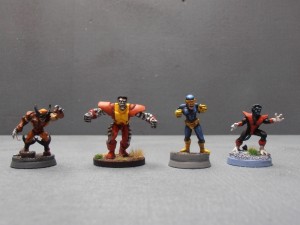 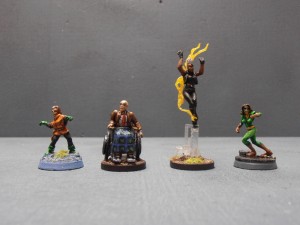 As you can see, Wolverine is resplendent in his Autumn ensemble (i.e. brown costume). I don’t remember Cyclops ever beings so light blue, so it was easy enough to darken his costume up. Rogue’s costume has changed about a dozen times over the years, and unfortunately the TSR model shows her in her “orange tunic/legwarmers” look. Although I can’t imagine using Professor X much in  Supersystem 3 (he’s way too powerful), I decided to include him for completeness. I changed his suit color and wheelchair and gave him a nice plaid blanket to keep his legs warm. I did the least with Storm, who only really needed some minor highlighting and rebasing to fit right in. 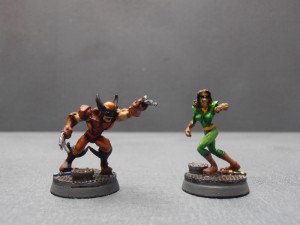 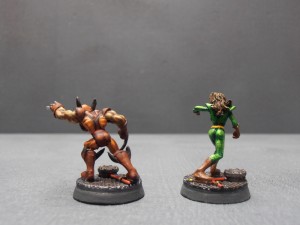 I had to change Wolverine and Ariel’s costumes completely from the original Heroclix models. I’m pretty happy with the results (although Ariel’s face could be better.) Kitty’s costume isn’t 100% accurate (she had a bigger collar and no shoulder pads), but I like it. No Lockheed the Dragon, sadly. 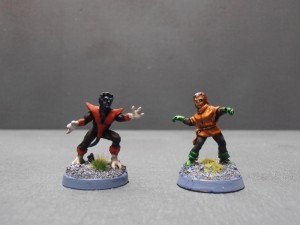 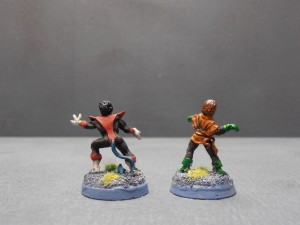 Here are the closeups of the TSR models. Nightcrawler isn’t too bad, but the Rogue miniature is really not all that great. Her pose is mystifying and like most of these TSR models, the facial sculpt is awful. I did what I could with her. I don’t know what kind of alloy TSR used in their miniatures line, but it really doesn’t hold paint well, even when primed. Paint rubs off easily, even just handling them during the painting process.

Now I just need to paint a certain Master of Magnetism and his cronies and we can play!

1 thought on “The Uncanny X-Men”