I used to hate the Penguin. He’s kind of silly. But now I’ve found a new appreciation for him as an adult. He’s been portrayed pretty well by most everyone who has played him. Burgess Meredith is, of course, the classic; but I love Robin Lord Taylor’s “skinny” Penguin on Gotham. (I wasn’t a big fan of Danny DeVito’s take, although I got where Tim Burton was going with it.) 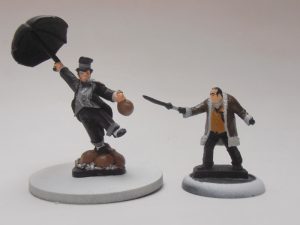 Above are two Heroclix versions of Mr. Cobblepot, both crying out for repainting and rebasing. The one on the left is the classic version, while the one on the right is the Penguin from the Arkham series of video games. Voiced very well by Nolan North, this version of the Penguin is probably the darkest and most menacing. For instance, he doesn’t wear a monocle; rather the glass around his eye is actually the bottom of a bottle that was jabbed into his eye socket during a bar fight. If he removes it now, he could die. So he just keeps it and scares little kids. 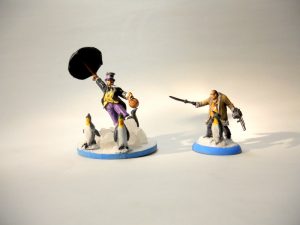 Here they are after I got my talons on them. 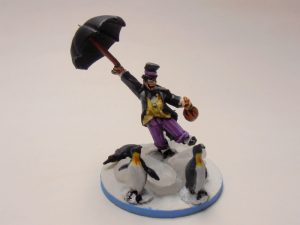 The original had the Penguin standing on bags of money, but I decided to cover them in white paint and sea glass so that they looked like ice and snow. I chose a classic, brighter color palette and added some Copplestone penguins. Now he’s ready to commit some avian-themed larceny! 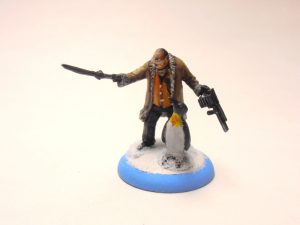 The Penguin of the Arkham games doesn’t go in for that trick umbrella nonsense. He’s an arms dealer. I figured if he’s going up against Batman, he needs all the help he can get, so I gave him a grenade launcher. I also couldn’t resist adding a penguin to his base too. 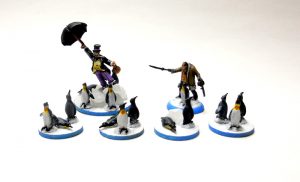 I had a bunch of penguins left over, so I based them in little groups. Many thanks to fellow TMPer Frederick, who hooked me up with these Copplestone penguins for FREEEEEEEE!

My Batman rogue’s gallery is growing. Mr. Freeze, the Riddler, and now these two versions of the Penguin. Who’s next?