I’m unsure about the rest of the world, but those of us who live in the USA periodically have these things come to town called “Monster Truck Rallies.” Basically, they fill an arena with loose mud and junk cars and unleash monster trucks to crush, spindle and mutilate everything they possibly can in the span of a few hours or so.

It’s not my thing. At all. Then again, not everyone likes bagpipes, so YMMV. Different strokes, as they say. Live and let live. Judge not lest ye be judged, and all that.

Often, these monster truck rallies are accompanied by loud music and scantily-clad women and are usually hosted by local radio personalities or former WWE or NASCAR “superstars”. As the title of this post implies, these events tend to take place on a certain day of the week. Watch this video, which is a parody (but isn’t far off the mark), and you’ll get the idea.

Sponsors include Bass Pro Shops, Wal-Mart and Bud Light. Priceless. (I know I said I wouldn’t judge. I lied.)

You can find actual monster truck commercials elsewhere on YouTube, lest you think I’m being unduly critical. (Here’s one.) In short, it’s shitkicker heaven; a pageant of redneckery that I believe is somewhat unique to America. It is less popular in the region where I live than in other parts of the country, and it’s not something that has ever interested me in the slightest.

Ladies and gentlemen of the wasteland: I present my Gaslands Monster Truck: Rock-n-rolla!!!! 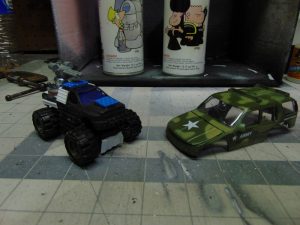 You may recall from my last post that Rock-n-rolla began as a Ford F-150 Hot Wheels car. I de-riveted it and applied some wire mesh to the windows before re-assembling the chassis.  My initial purchase of cars was a grab-bag at a thrift store, which included a junky military SUV of a larger scale. I promptly cannibalized it for its roof-mounted gun, but as I looked at my disassembled pickup, I suddenly realized that the SUV didn’t really need it’s wheels anymore, either. A quick fit-check and some minor alterations to the pickup chassis, and….Rock-n-rolla was born! 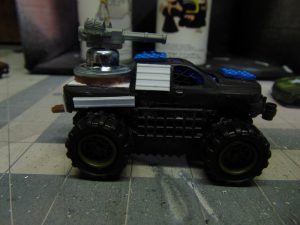 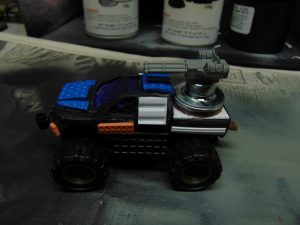 For some reason, a monster truck only has 2 build slots in Gaslands, which is the same as a car or buggy. (If I had left it a pickup, it would have 3 build slots.) I guess this is done for game balance, because a monster truck simply runs over anything it collides with (see above video). The point is I didn’t have much to work with as far as weaponry was concerned, so I gave it what I could.

I built the minigun turret out of a gasket, fender washer and axle nut glued to some corrugated plasticard. It fit snugly in the bed of the truck. For the actual gun, I could have used the gun I pulled off the SUV, but instead I raided an unopened box of Wargames Factory Shock Trooper Heavy Weapons Teams  for the double minigun. This is the first time I went outside the bitz box for something, but I think it was worth it.

Here is the finished result: 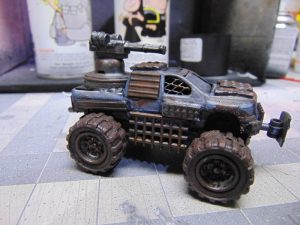 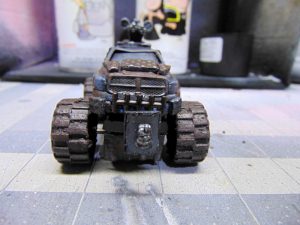 I put a ram on the front end, but I used an extra shield I had from a unit of Black Tree Ironclad Dwarfs. I like the fist emblem; it seems to fit a monster truck ram nicely. I added some armor purely for aesthetics, as Rock-n-rolla has no more build slots to spend on armor. Thus, no game effect; it just looks cool.

Here’s a shot of Rock-n-rolla next to my first car build, Coughin’ Joe. As you can see, he’s much taller, as a monster truck should be, thanks to the wheels I purloined from the larger-scale SUV. 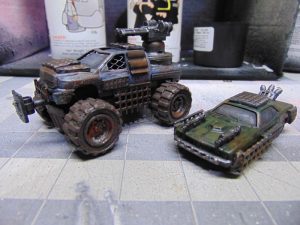 For those interested in the painting/weathering process, it’s pretty standard by now if you’ve read any of my other Gaslands posts. I used a mix of Cote D’Arms, Games Workshop, Reaper and Vallejo paints. Rock-n-Rolla’s body is based with Twilight Blue (R), with a highlight of Lupin Grey (CD), then given a wash of Nuln Oil (GW). The armor plating was painted with either Gunmetal Grey (V), Gun Metal (CD) or Tin Bitz (GW) before being washed with Armor Wash (CD). The gun turret was painted Adamantite Black (R) and dry-brushed with Necron Compound (GW) before given a wash of  Nuln Oil (GW). I used some Typhus Corrosion (GW) near the armor plating to further the grimy look, and I used copious amounts of Stirland Mud (GW) on the tires and undercarriage. Lastly, I used some MIG rust pigment on the armor, hubcaps and body.

I never thought I would ever say this in my life, but I think this monster truck is pretty cool!

I’m hoping to have my final (for now) Gaslands post up by the end of the month, as I have some big plans for May. I’ve saved the best for last, or at least the biggest for last….