Well, the end of April brings me to the end of my Gaslands posts, at least for now. I’ve saved the best for last: ladies and gentlemen of the wasteland, I present Grond, the war rig! (The Tolkien-philes among you may recognize the name Grond: it’s the name of the huge battering ram the forces of Sauron used to sunder the gates at the siege of Minas Tirith. I feel it is an appropriate name for my rolling death machine.)

From the moment I first read the Gaslands rulebook, I knew I needed to make a war rig: a big, diesel-burning armored machine of death to crush my enemies, see them driven before me and hear the lamentation of the women. Originally, I wanted my armored bus Marstorius to be a war rig, but there’s one small problem with that: although Marstorius is certainly big enough for a war rig, it is not articulated; meaning it has no separate cab and trailer. It’s all one piece. Whether or not a war rig is articulated is a pretty big deal in the game, as it affects such things as hazard tokens and vehicle orientation.

I started with this Hot Wheels truck. It was the most money I spent on a Gaslands car thus far: almost $7.00 brand new. In my haste to get started, I neglected to take a picture of it before I started work. So here’s a YouTube video review of it by a somewhat enthusiastic Hot Wheels aficionado. You may notice it comes with a another car (Maybe it could be a performance car, see below), so I guess for seven bucks it wasn’t a bad deal.

I wanted to use a flatbed-style truck because I wanted to have a turret-mounted flamethrower, and I didn’t like the look of it on top of a full-sized trailer. It just looked too high up.  The flatbed seems pretty unprotected, however, so I started armoring up the sides. Before I got started, I built my flamethrower turret and made sure it fit inside the bed. 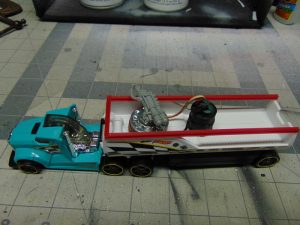 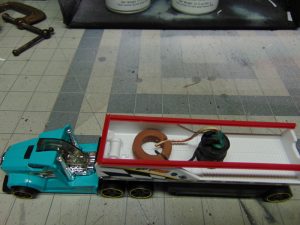 The side rails are coffee stirrers. The flamethrower turret was made from a couple of rubber faucet gaskets, a fender washer, a lock washer and an axle nut, much the same as the turret on my monster truck, Rock-n-rolla. The flamethrower itself came from a Imperial Guard Sentinel sprue (I think). I decided to use a GW oil can as a fuel source and clipped some old speaker wire to use as hoses. I cut slots in the rubber gasket to accommodate the wires; that way it would look like the barrel was supplying oil to the turret through the hoses. 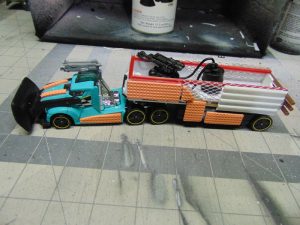 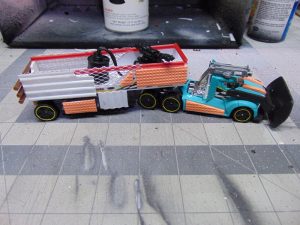 I applied some wire mesh, craft foam and plasticard as armor plating, mounted a GW heavy bolter to the cab roof, and a plow blade from a Tonka bulldozer I got at a flea market. A war rig has the most build slots of any vehicle in Gaslands, a whopping 5. The flamethrower took up 2, the machine gun and the plow took up one each. That left me with one more build slot. I could just use the extra armor, but a war rig doesn’t really need any more armor. As you can see, I have a lot of room left in the bed of the truck, so I started thinking about a mine dropper. 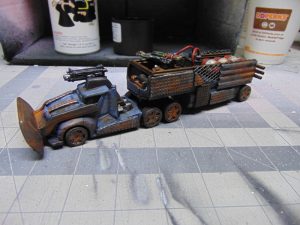 Instead of traditional mines, I thought it would be cool if Grond dropped explosive barrels off of his tailgate whenever any pursuers got too close for comfort. I had some of these old barrels around and they fit the bed of the truck perfectly, so I painted them in the ubiquitous “explosive barrel” color scheme familiar to anyone who plays first-person shooter video games. 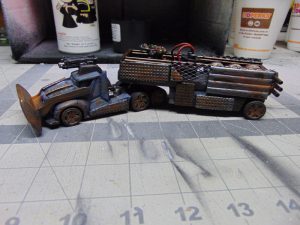 One may question the wisdom of having a 360° flamethrower operating in close proximity to volatile, explosives-filled barrels; but I can assure you not one crewmember aboard Grond ever thought twice about it. Not for a second. What could go wrong? 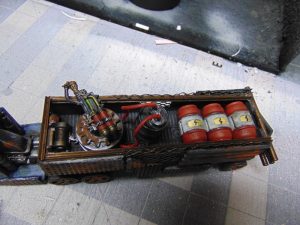 Here’s a close-up of the bed of the truck. I’m quite happy with the way the flamethrower turret and the barrels came out. 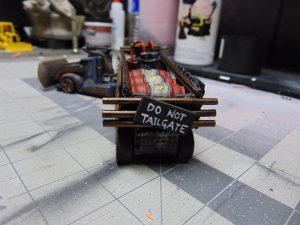 Here’s the back. The bars were made with coffee stirrers (a different kind), the sign from a piece of craft foam. If you take an explosive barrel to the face, you can’t say you weren’t warned. 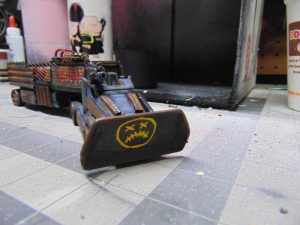 And a close-up of the front. I considered writing some pithy statement on the blade, like “Here I Come!”, but decided against it, as it would have to be written backwards in order to be read in a rear-view mirror. If you were actually facing Grond, you wouldn’t need to be told as you would see it coming, thus rendering any warning somewhat superfluous. So I drew this dead smiley face instead. 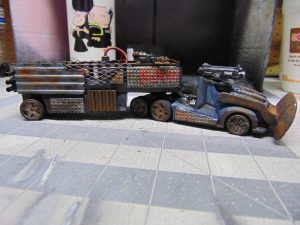 Painting for all my Gaslands vehicles is pretty much the same. I used a mix of Cote D’Arms, Games Workshop, Reaper and Vallejo paints. Grond’s body is based with The Fang (GW), with a highlight of Shadow Grey (CD), then given a wash of Nuln Oil (GW). The armor plating was painted with either Gunmetal Grey (V), Gun Metal (CD) or Tin Bitz (GW) before being washed with Armor Wash (CD). The machine gun and the plow were painted Adamantite Black (R) and dry-brushed with Necron Compound (GW) and Tin Bitz (GW) before given a wash of  Nuln Oil (GW). I used some Typhus Corrosion (GW) and Stirland Mud (GW) on the tires, wheel wells and the plow. Lastly, I used some MIG rust pigment on the armor, wheels and body. 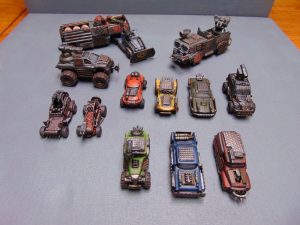 Well, that about does it for Gaslands for now. I want to focus on some other projects and perhaps get some actual games in before I start on any new cars and/or terrain. One thing I didn’t build were any performance cars, which are a separate type of vehicle that is really good at evading collisions. They can reach the highest gear, which allows them to activate more often than most other vehicle types. They tend to be more elegant and less rusty and Mad Max-y then the other cars; more finesse than brawn. Perhaps in the future I’ll convert some performance cars, but other than that, I think I’m pretty happy with what I’ve got so far: seven cars, two buggies, a monster truck, an armored bus and a war rig.

2 thoughts on “Gaslands 6: Grond: Going Big with the WAR RIG!”