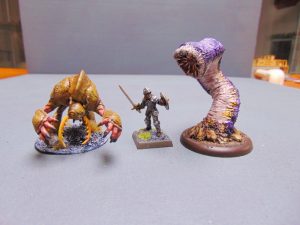 Monster Month kicks off with two classic AD&D monsters straight from the Monster Manual: the Umber Hulk and the Purple Worm—two very good reasons not to adventure underground.

The Umber Hulk is from the Nolzur’s Marvelous Miniatures line, which is a new-ish Wizkids line of computer sculpted miniatures that are both inexpensive and impressive. Wizkids has the rights to produce all the “official” AD&D monsters like the Umber Hulk, which is why you’ll see them called by their true names and not by a knockoff (i.e. Reaper’s  rust monster, the “oxidation beast”). I have to imagine that Wizkids is taking their cue from the massive success of Reaper Bones, because the Umber Hulk cost a mere $3.99. He’s a pretty decent size, too, as you can see from the (very nervous-looking) 28mm Reaper fighter standing between him and the worm. The Purple Worm is a Reaper Bones version of their “Great Wyrm” sculpt. I believe it also retailed at $3.99. Again, great price, decent size, great sculpt.

These Nolzur’s miniatures are, like Bones, supposed to be ready to paint without priming; in the case of Nolzur’s, they are supposedly primed already. Regardless, I choose to prime both Nolzur’s and Bones miniatures with Vallejo surface primer, because the paint rubs off if you don’t (no matter what they say). The Umber Hulk miniature required a little additional preparation prior to painting. Like Bones, many of the Nolzur’s miniatures set in weird positions after the casting process and need to be repositioned, which is actually pretty easy to do. Initially, this Umber Hulk’s mandible hung lower than its base, which would have made standing him up impossible. A quick dip of the miniature in some hot (but not boiling) water allowed me to bend it into a more upright posture, then a quick bath in some cold water made sure it re-set that way and wouldn’t go back. This method also works with Bones and even Heroclix, depending on the thickness of the plastic you’re trying to reshape.

Once he could stand up without stepping on his own jaw, I got to work: 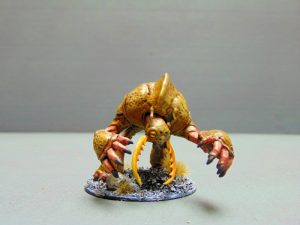 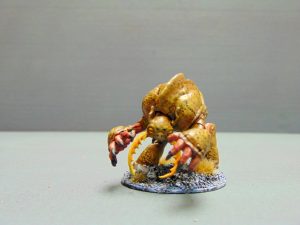 According to the Monster Manual (3.5 edition in case anyone cares), an Umber Hulk resembles a cross between an ape and a beetle. It dwells deep within the earth, and can rip through solid stone like it was paper. AD&D player characters fear the Umber Hulk for several reasons. It’s covered in armored plates, it’s strong and can dish out a lot of damage, and it can hypnotize you with its eyes. But perhaps the scariest thing about an Umber Hulk is that it’s smart; often, it’s smarter than the PCs. The average human ability score (including Intelligence) is a 9. An Umber Hulk has an average Intelligence of 13! 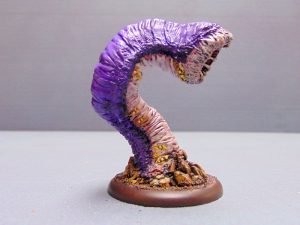 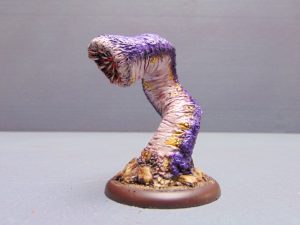 The Purple Worm is another well-known AD&D monster. It’s a massive scavenger worm, covered in purple chitinous armor. A mature Purple Worm has a 6′ diameter mouth and is about 80′ long. (This one must be a baby.) It can easily swallow prey whole, including humanoids. To top it off, it has a poisonous stinger in its tail.

Being a Reaper Bones miniature, it’s not an “official” Purple Worm. I just painted it up that way. 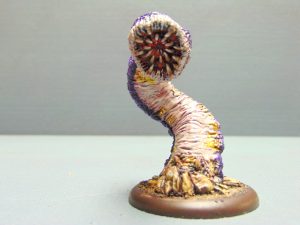 Off to a good start, even though it’s only the first week. I’ve painted more than I’ve purchased. Good on me.