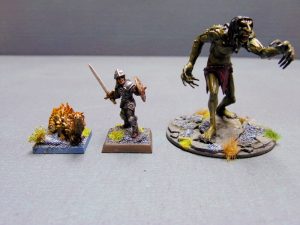 Monster Month continues with a couple more beasties: the dreaded basilisk and the AD&D version of  a classic monster: the troll! 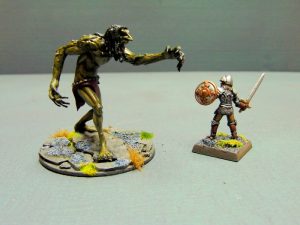 The troll is from Nolzur’s Marvelous Miniatures, and I am hard-pressed to recall seeing a finer version of the classic AD&D troll. I absolutely love this sculpt. If I have one criticism, it’s that he’s a bit too big; most trolls are 9 feet tall or so; this guy looks like he’s twice the size of the fighter next to him. In addition, his built-on base is somewhat problematic if you plan on mounting him on the included 50mm circular base, as it overlaps the circle somewhat due to his wide stance. I chose to use a bigger (60mm) base, but that meant I had a lot of space to fill. I used some cut-up pieces of craft foam to simulate dungeon flagstones and here is the finished result. 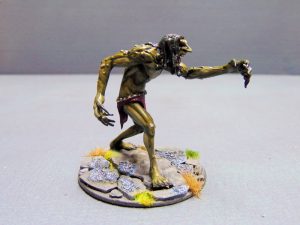 Everyone knows what a troll is, but the AD&D version of a troll is particularly nasty, as they regenerate all damage—including severed limbs—given enough time. The only way to put a troll down for good is with fire or acid. Other than that, run. The AD&D troll has a somewhat unique look to them as well; the long arms ending in ragged claws, the rubbery body, socketed eyes and wiry hair. They’re pretty horrific. And they’re always hungry. Thankfully, they’re not that bright, so it’s somewhat easy to outthink them. 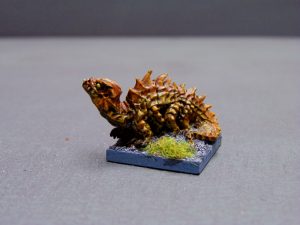 A basilisk is an eight-legged reptile that petrifies victims with its gaze, much like Medusa. A significant difference between the two, however, is that Medusa decorates her lair with the statues she creates, while the basilisk just eats them. Yes, a basilisk is fully capable of eating the stone bodies of its victims. Basilisks are about as smart as your average reptile. In other words, not very. 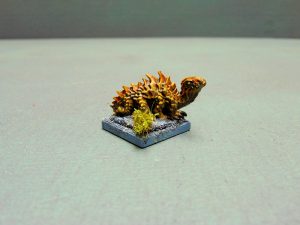 This basilisk is a Reaper Bones version. This was a miniature that I was unhappy with throughout the entire painting process. I felt like I chose the wrong colors and I everything I did just seemed to make the miniature look worse. Finally, I applied a wash of GW’s Fuegan Orange to his spine and the tips of his scales, and everything looked a million times better. Now I’m pretty happy with how he came out.

4 thoughts on “Basilisk and Troll”