My latest two “monster month” projects have arrived! Presenting: the Griffon and the Bulette (Land Shark). 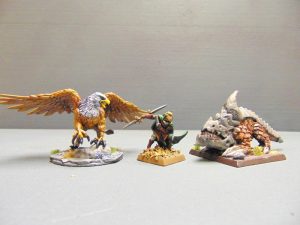 (Astute observers may notice that the model in the middle of these two monsters has changed since the last post. That’s because I couldn’t seem to find that human fighter who found himself between an Umber Hulk and a Purple Worm, and then between a hungry Troll and a Basilisk. Perhaps his luck finally ran out…) 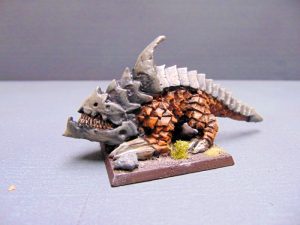 The Bulette, also known as a land shark, is a terrifying predator that lives only to eat (much like a regular shark). It burrows beneath the ground and bursts to the surface whenever it detects the vibrations of movement. A bulette has a territory of about 30 square miles, and will attack anything it comes across, completely consuming its prey (clothing, armor, weapons, etc.). When it has eaten everything in its territory, it will move on to another area.

Bulettes are not usually smart; however there is a famous case of one land shark ringing the doorbells of unsuspecting victims, fooling them into opening the door by pretending to have a delivery of something (flowers, candy, etc.). Once the victim opened the door, the land shark would strike! 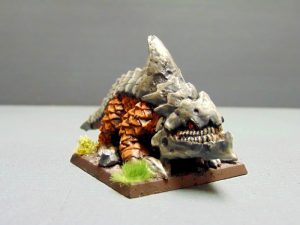 This bulette is a Reaper Bones “land shark” (appropriate, no?). 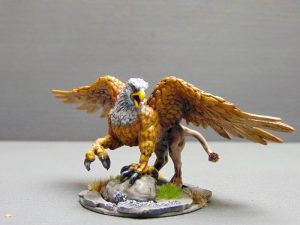 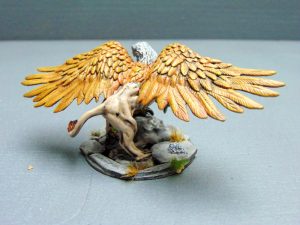 A griffon, as everyone knows, is a majestic beast with the body of a lion and the head, wings and front legs of a great eagle. Griffons are fierce predators and enjoy eating horses most of all. Griffons are semi-intelligent and are much prized as mounts for heroic characters, as they are capable of being trained by those with enough daring and skill.

This griffon is yet another of Nolzur’s Marvelous Miniatures.  I used the hot water/cold water bath method to reshape its wings somewhat, but that’s about it. In all my years of painting, I have never painted a griffon before. I really like this miniature (score another for Nolzur’s); therefore I have named him Merv.

You see what I did there?

6 thoughts on “Griffon and Land Shark”