It’s 2/3 of the way through the month, and I finally have my next batch of Dungeon Saga miniatures to post. At this rate, I’m unlikely to get the whole set finished by month’s end, but I won’t have much more to do and I should be able to finish the base set by the end of the year, in between my other projects. 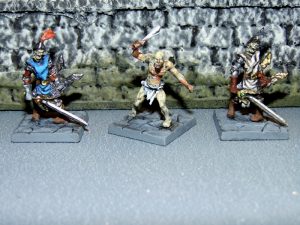 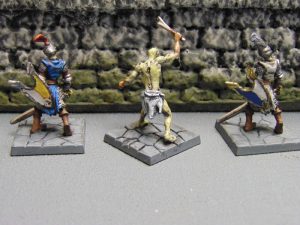 This time around, I decided to focus on the zombies. There are four regular zombies, and two wearing armor. 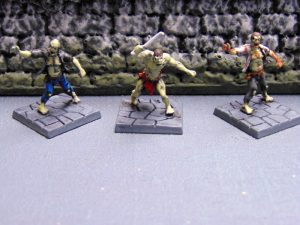 I have to say that I’m really not a fan of most of these Dungeon Saga miniatures. Not because they look particularly bad, but because they’re fragile. Many are misshapen, and despite many attempts at reposing them, they tend to stay that way. Thankfully, Mantic seems to be aware of the problem, so only one foot is attached to the base. This allows you some measure of control to reposition the model before gluing the other foot down. This straightens the model’s posture, which is a good thing. But it doesn’t help with bent weapons or arms at all. 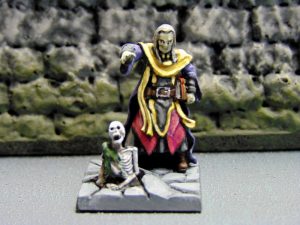 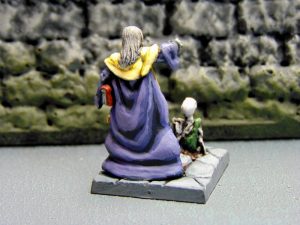 In addition to the zombies, I painted another bad guy: Mortibris, the Necromancer. Once again, I ignored the “official” Mantic paint colors in favor of my own classic necromancer color scheme that harkens back to the days of my old-school Warhammer undead army. I like how he came out, but I wish the picture was a bit more in focus.

This week, I didn’t buy any more miniatures, but since I’m keeping a year-to-date total (or at least a running total since I decided to start keeping track), I’ll include my earlier purchase. That miniature will be painted soon, hopefully by the end of the month…he’s just too cool to put off.

Up next, however, I’ve decided to focus on one of my favorite painting subjects and the namesake of this game: Dwarfs!

2 thoughts on “Saga’tember: Zombies and Necromancer”