I have found a cure for my painting blues. I’ve decided that rather than drive myself crazy painting things I don’t want to, I’ll take a break and get started on those Dwarfs I’ve been meaning to paint for a while. Here are the results. 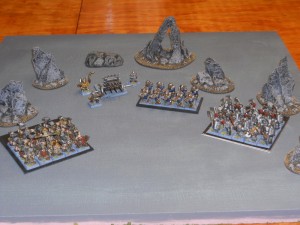 It’s a modest start: one unit of Warriors, one unit of Miners, a small unit of Quarrelers (that’s crossbowmen, not argumentative dwarfs), and an organ gun. It should be noted that with the exception of the organ gun and its crew, none of these are GW models.  Like I give a shit. Both the Warriors and the Miners are from Black Tree Design, the Crossbowmen are from Mantic. I placed them around some Gale Force Nine Battlefield in a Box Rocky Outcroppings. 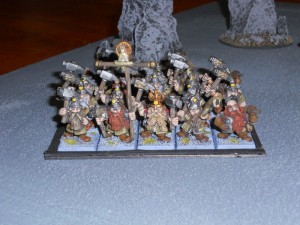 First up are the Miners. I love the look of Black Tree’s dwarfs, as they are all metal and chunky, reminiscent of that old Citadel Dwarf range, which I really like. The only criticism I have of them is that there isn’t enough variation in the packaging. Out of 20 figures, I got 5 of one sculpt and 4 of another, while conversely I got 1 each of two very cool sculpts. Oh well. I did my best to paint them with enough variation so that they are individualized, but I tied the unit together by using the same dirty colors across the board (they’re miners, after all). I used some leftover mat board from my Modular Roads project as movement trays. 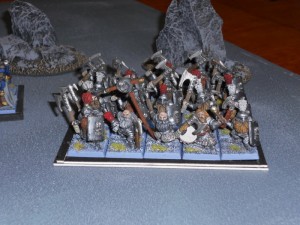 Up next are the Warriors. Again, I like the look of Black Tree. These guys are doubly cool because they’re so armored up, I could easily use them as proxy Ironbreakers. (Quick Math: I get 20 of these metal dwarfs from Black Tree for about $40. The same unit of “official” GW Ironbreakers would cost me $100.  I’d say they’re likely to be Ironbreakers most of the time.)

I didn’t make any banners for either unit yet, because I kind of suck at scratch-building banners. Maybe one day I’ll get around to it.

Last are the Quarrelers and the organ gun. The organ gun is an old-school GW metal version. I actually like the newer version better, but this one is fine.  I have mixed feelings about the Mantic Dwarfs. They definitely have a look all their own, and you can’t beat the price at about $1.50 each. I really dislike the fact that in this pack of 10 dwarfs, you get a bunch of head variations but can only really use 5, as the other 5 dwarfs are all one piece. The one-piece dwarfs are the dwarfs that are firing the crossbows, pretty much the front rank. There is a noticeable lack of detail on these models as opposed to the ones with separate heads. In addition, they don’t really rank up well unless you want the back rank to be facing off to the side. A somewhat annoying design flaw.

So, what next? Well, I have all the dwarfs from the Battle for Skull Pass boxed set awaiting painting: 12 Warriors, 10 Thunderers, 8 Miners, a cannon and crew, a Thane and 1 Slayer. (I’ve always thought Dwarf Slayers are stupid.) I have an unbuilt unit of Mantic Shieldbreakers that seem to have the same annoying lack of detail on the one-piece models as the Crossbowmen. And I have another regiment of GW dwarf Miners (making that 15 more miners in total, minus my unneeded second command group). I have another dwarf cannon and crew, and a proxy Flame cannon to paint, plus a few lords and heroes…So the army is a long way from complete, but I need to get back to my other projects for now.