The two parties eye each other warily across the clearing, both groups knowing the other’s intentions are the same: to plunder the watchtower and secure whatever riches may lie within. 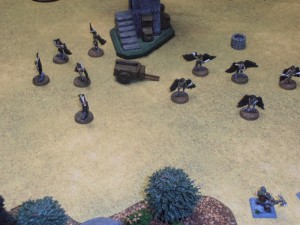 But as each group rushes to be the first to the tower, they are besieged by more monsters! Harpies descend upon the adventurers, shrieking madly!

(I modified the harpies somewhat. In Battlesystem Skirmish, harpies have 7 hits each! Since each party was facing five harpies, I thought that was too many hits to have to deal with based on the characters’ Attack Dice. I reduced the harpies’ hits to 3 each. Turns out I probably shouldn’t have, but live and learn.)

The gnomes gain initiative for the round, and waste no time in attacking. Durwald shoots a harpy with his Crossbow of Accuracy for 1 hit, while Graflin strategically casts Gust of Wind, grounding the harpies and making them more vulnerable! 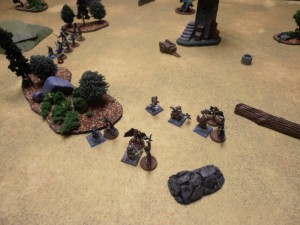 The harpies attack next, and all attempt to Charm their opponents with their seductive song. Among the dwarfs, Boris, Reglan and Grimnar fail their saving throw and are Charmed! Poth and Siegfried resist the magical song. The gnomes don’t fare much better, as Stengil, Durwald and Ashlock all fall victim to the song, while Graflin and Cavram, the human, both save and resist it.

Finally the dwarfs get to attack, but since three of them are charmed, it falls to Siegfried and Poth to defend their friends. Poth throws an axe at a circling harpy, inflicting 1 hit. Siegfried takes the opportunity to cast Dispel Magic and free his friends from the magical charm!

The harpies gain initiative next round, and tear into the gnomes! Their filthy claws rake Stengil for 2 hits, and both Ashlock and Cavram take another hit each. Meanwhile, the other group of harpies attack the dwarfs, wounding both Reglan and Siegfried for 1 hit each. The dwarfs respond. Both Siegfried and Poth manage to wound their opponents, but not enough to kill any. 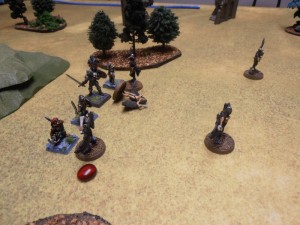 The gnomes fight last in the round, but good things come to those who wait. Cavram slaughters a harpy out of hand, while Graflin casts Fear on the group. 2 of the harpies immediately rout, breaking the charm! At the end of the round the harpies check morale again, and fail spectacularly with a natural 20! The group of harpies is so panicked they are paralyzed for 2 rounds!!

The harpies win initiative for the next round, but only the group fighting the dwarfs is in any shape for combat. Both Poth and Siegfried take a wound each. The gnomes attack the vulnerable harpies on their side of the clearing, with predictable results: Cavram kills another harpy, while Ashlock wounds another. Graflin steps back and casts Melf’s Acid Arrow, killing yet another harpy. 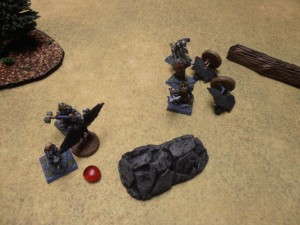 Finally, the dwarfs fight back. Both Grimnar and Siegfried kill their opponents, Boris manages to wound one of the harpies facing him. The harpies check morale and roll a 1!!! These harpies, unlike the ones fighting the gnomes, now have a permanent +2 to morale for the rest of the battle. They’re not going anywhere!

Unfortunately for the harpies, the dwarfs gain initiative next round and waste no time maintaining their offense. They kill 2 more, leaving a lone harpy facing 5 angry, wounded dwarfs!

Meanwhile, the gnomes finish off the harpies facing them. Cavram kills one on the charge while the remaining gnomes clean up the rest. The lone harpy facing the dwarfs attacks Siegfried in a frenzy, wounding him for 2 hits!!! Siegfried sways on his feet, down to 2 hits from his original 6. Ouch! Being vastly outnumbered and facing certain death, the harpy checks morale and fails. She is shaken!

The dwarfs act first next round, and Grimnar wastes no time taking the remaining harpy’s head off her shoulders. Siegfried takes the opportunity to cast Cure Light Wounds on himself, healing one hit. On the other side of the battlefield, Graflin prepares himself for further combat (possibly with the dwarfs???) by casting Shield on himself, increasing his armor! 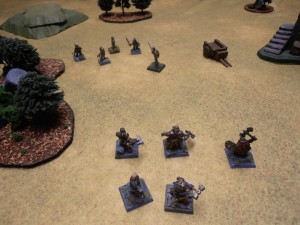 The two parties square off across the clearing. Each takes the opportunity to consolidate their grouping. Siegfried also casts his remaining Cure Light Wounds on himself, restoring him to 4 hits. 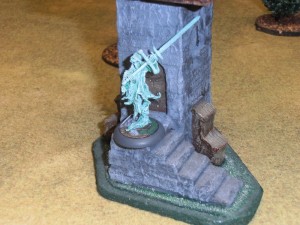 But wait! Suddenly a malevolent  presence is felt. At the watchtower’s door, a spectral form takes shape! Could this be the source of evil that has blighted the watchtower these many years??? Will the warbands join forces to defeat it?

Maybe someday we’ll find out, but not today. That’s as far as I got before my bedtime.