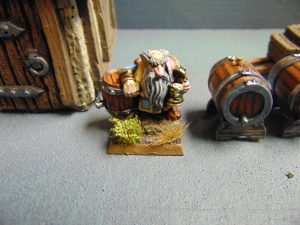 Today, I present to my readers my favorite role-playing character of all time: Khelden.

Khelden is an Ultangen Dwarf, a race from my good friend Owen’s fantasy setting, Gandaria. (Owen used to have a whole website dedicated to this setting and some of his other gaming and writing endeavors, but he took it down a couple of years back, which is a real shame.) Like many dwarfs, Khelden was a soldier for decades, a veteran of countless battles and a formidable warrior. But Khelden left the Dwarflands to start a life elsewhere. A brewer by trade, Khelden set up a prosperous business in the large, mostly human city of Brimshire. His wealth and character allowed him to achieve some status among the merchant class and the nobility.

Khelden is immensely strong; and while he is no deep thinker, he possesses the canniness of one who has lived by his wits and skills for many long years. He is an exceptional fighter, but he considers brewing his profession. While he excels at brewing (it’s his highest GURPS skill, in fact), he is constantly being called away from his brewery to battle monsters or deal with the intrigues of evil beings. Khelden wields Arshavir, a dwarven mace of great power and a relic from many centuries past, long thought to be lost. The mace has an adverse and dangerous effect on the weather the longer it is used in battle. Luckily, Khelden finishes most fights quickly.

This miniature is a perfect representation of Khelden as a Master Brewer in his later years, assuming he ever got to live that long (unlikely, considering the lethality of Owen’s campaign). He has finally settled down and retired, enjoying the fruits and rewards of a life well-lived. At long last, he has perfected his recipe for his dwarven stout, better known as Khelden’s Black. Unfortunately, this miniature does not have a mace, but a hammer instead. Khelden used a hammer in his early years. I imagine that since he is now old, Khelden has passed Arshavir on to a younger, worthy dwarf; and is content to take up the hammer again. 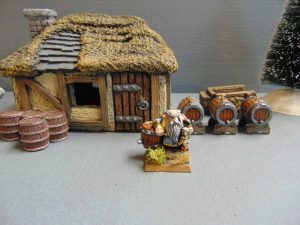 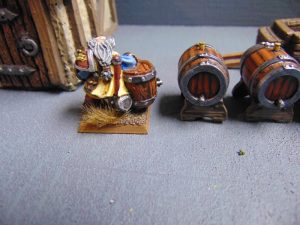 The miniature is the Dwarf Brewer from the Reaper Bones line. The ale casks on the right of the picture are from Deep Cuts, part of the Pathfinder scenics they’re putting out nowadays. Both Bones and Deep Cuts claim they do not need primer and that paint can be applied directly to the model, but I primed everything with Vallejo surface primer and I’m glad I did. I like the ale casks. At $3.99 for the three pack they’re priced nicely, but they don’t sit levelly. It’s a minor quibble, but it’s there. The Reaper dwarf miniature was only $2.50! I’m starting to find a new appreciation for Reaper Bones…

If you’re interested in yet another of my old characters, I posted a short write-up of my monk, Brother Jerrod, way back in March 2015. 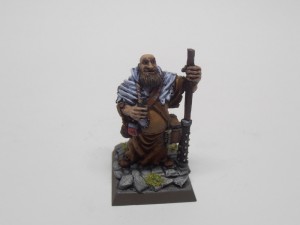 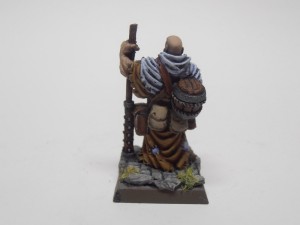